Hecate has been producing all-female shows since 2010; find out about a few of our previous productions below.

A brand new adaptation of Aristophanes’ zany comedy about summoning dead playwrights to settle a divine score. Join the god of drama, Dionysus, on a journey to the Underworld to spark rivalry, ribbiting and an epic battle of wits. Hecate Theatre’s Frogs is an all-female take on this bonkers Greek classic. Featuring a literary smack-down between William Shakespeare and Jane Austen, and with a quirky choral soundtrack, Hecate create an eerie post-apocalyptic world in which the grotesque ‘frogs’ tell their story as an ensemble cast of five females.

“The real star of the show here is the ensemble cast who croak, sing and banter their way through a sparkling, relevant script” – Bristol Culture
“Extremely entertaining, an absolute delight to watch from start to finish” ***** – Theatre Bath
“A crafty and clever fusion of the ancient and modern worlds… energetic, fast-paced, and amusing.” **** Inter:Mission

We’re following up on our 2013 panel debate, Curtains for Feminism?, with an evening of discussion on the topic of Writing for Women.

Who do you write for and what do you write about? In the theatre, there are proportionately far more male writers and directors than female, yet there are more female actors looking for work in the industry. For one evening’s discussion, Hecate Theatre bring together five panellists from different backgrounds in the worlds of theatre and feminism, to present and converse on what it means to write as a woman, for women, and about women.

Entry is £2 on the door. No booking is required. Have your say – join the conversation.

Who can you trust? Who should you believe? It’s 1966 and three sisters live in apparent harmony. Little do they know, they are about to receive a visitor from their past intent on dragging up secrets they tried to forget. What dreadful truth lurks beneath the surface of their sibling rivalry? Hecate Theatre breathe new life into Gwen Cherrell’s parlour-room drama, revelling in the vintage vibe, with their sixth show to date. Directed by Hecate newcomer, Ed Browning, and with original music by Sara Garrard.

“The four women weave their way through the script with natural ease and a certain charm… it’s definitely worth heading over to the Alma before the end of the run!” **** – Theatre Bath 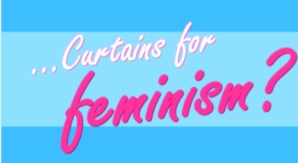 As an all-female theatre company, we pride ourselves on producing theatre for casts made up of solely women, without typically ‘feminist’ subject matter. But what should theatre for women really be about? Hecate present an evening asking just that – featuring speakers from varying backgrounds in theatre-making and performance, plus a Q&A with the audience. Why is ‘feminism’ such a scary topic to discuss nowadays and what is its relevance when it comes to creating theatre? 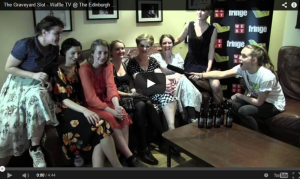 A radio play performed live! Hecate return to the Fringe with a feast of funny and fright. Join a handful of actors, two microphones, a keyboard and a variety of sound-making props, in a live radio comedy paying homage to wireless dramas of the 1940s/50s. When Janet De Bastion returns to her family home for a grand birthday party, she is shocked to discover that her eccentric late Uncle Ignatius, who claimed to have discovered the secret of alchemy just before his untimely death, has left her a treasure map in his will. However, it transpires that Janet isn’t the only one hunting for Uncle Iggy’s gold, entangling her in a cast of crackpot characters, crime, mystery and voices from beyond the grave…

“an enthralling, wholly attractive performance for its audience, courtesy of inventive staging and an extremely talented cast… very funny and very intriguing” **** – RemoteGoat 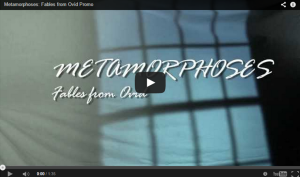 Not for the faint-hearted. Six myths from Ovid’s Metamorphoses are retold by four girls and their Matron, in a Victorian boarding school dormitory. The night before their debutant ball, where they will transform (in the eyes of society) into women, they recount stories of transformation to each other, using only bed linen to weave their tales. Horror blends with comedy through inspired staging and a darkly twisted script.

“Pared down Metamorphoses it may be, but it’s full of charisma and completely engaging.” **** –Fest Mag
A “wonderfully fresh and lively production” **** – British Theatre Guide